Ok, so I didn’t exactly live up to my promises of more recipes etc did I?! Sorry about that, I’m going to be honest though, it just isn’t going to happen. I like making food and I certainly love eating food, I’m just not that excited to write about food or work out the quantities etc, I think I’m going to leave recipes for other people to write up! If you are on Instagram though you can find me under mylipoedemalife , I often share my meals on there and it’s all usually things that you can cook pretty much with no recipe! I’m still 99% keto but because I’m not super strict and probably have a few low carb foods that aren’t technically “keto” I thought I’d stick with saying I’m low carb, that way the keto police don’t get upset hehe!

I have some rather exciting, and perhaps a little bonkers news to share with you …. I’ve entered a half marathon next March! It’s something I’ve always wanted to say I’d done and I decided I would really like to do it with my lippy legs rather than wait until I’ve had the liposuction done, in doing so I intend to run the race to raise money for Lipoedema UK as well as hopefully some money towards my first surgery. I’ve never been a runner but I’ve been training for a month already and with the help of the Couch to 5k app I can now officially run 2.5km with no break, for me that’s jolly good going let me tell you! So, Hasting’s half marathon I’m coming for you and I hope to squeeze in a few shorter races before then just to get me in the mood! I’m actually finding it incredibly good for my mental state and it’s most definitely helping lower my heart rate which is an added bonus where the POTS syndrome is concerned. 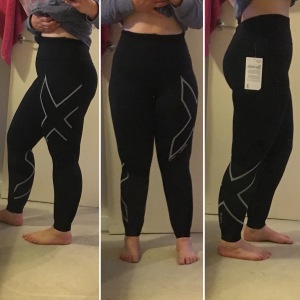 Until recently there is absolutely no way I would have been seen in public wearing skin tight running tights but I’ve finally accepted my legs for what they are and I really couldn’t care less what people think of them, so I splashed out on these rather fetching 2xu compression tights and I must say I feel a bit like superwomen in them …!!

As well as being a personal goal I want to use this as a means of showing people, the NHS included, that Lipoedema sufferers can eat as healthily as we can and train as hard as we want but this diseased fat isn’t going to budge for all our best efforts. I actually saw my GP this morning, I knew a funding request was likely to get denied but I felt I should at least try and request funding for the Lipoedema liposuction on the NHS before spending the best part of £20k on having it done privately. It was worse than I’d expected though, my GP wouldn’t even put a request in for goodness sake!! I find it unbelievably unfair and incredibly annoying that because I refuse to give in to my ‘illnesses’ I get no consideration for funding, apparently because I’m not clinically depressed and I still go to work and carry on with my life he believes they wouldn’t even consider me. Whereas, if I moaned all the time and never went to work when I was in pain (which would be everyday) and I accepted their previous attempts to prescribe me antidepressants etc then I might have a chance. They don’t feel that operating now to prevent the almost guaranteed progression of the disease is a ‘worthwhile’ idea. Please don’t get me wrong, I think we are jolly lucky in this country with the NHS and they have done a HUGEEEEE amount for me in the last few years but it doesn’t make in any easier to know I really am on my own with this one!

Anyway, as I had expected a similar response I am very excited and a little nervous to be flying to Berlin on the 3rd of November to spend a few days sightseeing and having a consultation with Dr Labshies at the Med-Plast clinic. After months and months of research and emails, and phone calls, and speaking to previous patients I am 99% sure this is the man to make my dreams reality but I will know for sure once I have met him and his team. I’d be lying if I said this wasn’t all incredibly daunting but I know it is something that I have to do if i want to move forward in life with less daily worries and so I am going to fundraise, beg, borrow but not steal hehe as much money as I can towards the first operation and I will then address the following ones as they approach.

So, for now the running will continue and I have got a lot of cakes to get done before I go away so I know I won’t be updating until I get back but I will most definitely be back with a running update and Berlin report when I get back! Until then you can follow my progress in all angles on my Insta account.