‘Surely not another problem?’, ‘What’s it today then?’, ”What’s wrong now?!’, the list goes on and on. These are the sort of comments I seem to get on a nearly daily basis from people around me, I know they mean it ‘jokingly’ but I struggle to see the funny side when it’s my reality! I know I know I’m meant to be Miss Positive these days, and I promise I’m still finding plenty of good in every day but I think I’ve just felt totally overwhelmed this week.

Monday morning arrived with the most horrendous pain in my lower abdomen, it was making me throw up and my POTS spiralled out the window! With my heart rate soaring and whole body shaking I miserably lay in bed feeling completely pathetic! By late morning I’d decided it wasn’t bad enough to be an appendix pain and was hovering closer to the area of my ovarian cyst and so I tried to soldier on, some codeine and a double dose of IBS meds later and I was feeling much better in myself but the pain in my lower right side was still screaming off the chart.

After a fairly good nights sleep I was sure Tuesday was going to be a better day … I was wrong 😦 The pain was still bad and so I gave in and booked in to see the doctor. He had a poke around my tummy and with little trouble isolated the area in question. Now there’s two options, either I have an issue in my bowel as well as a big cyst OR it’s just the cyst causing all this trouble!! So, he has chased up the hospital and asked whether my appointment could be brought forward to see the gynaecology consultant. In the meantime I will be having a scan this week to ensure it isn’t anything serious, fingers crossed please everyone!
I guess being back in the ‘unknown’ territory, along with having no car, a POTS flare up and the usual fatigue issues I have just found this week way too much to handle. I feel like curling up in a duvet and shutting off from the world, BUT that is absolutely 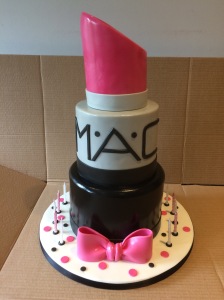 110% not even slightly allowed and I will not give in to temptation. Aside from the bad bits I’ve had an awesome week with cakes, I had lots of orders and my absolute fave was the MAC lipstick! They were all a little more challenging than normal as I was battling my health issues but I did it and that makes me feel much better. Plus, I thought the cake came out awesome, three years ago I wouldnt even have known how to make a fairy cake let alone believe I could ever make one of these!

I know noone means any harm when they make those comments but the upsetting fact is that this is reality for me. Every morning when I wake the first things that come into my mind are ‘What’s today going to bring?’, ‘Which limb or limbs are hurting?’, ‘Must chase up the doctors’, ‘Ouch, what’s that?!’ , blah blah blah! I’ve got used to that though, I just get up and crack on and keep myself busy as it’s the only way I know how, majority of the time it works a treat but not when you have everyone surrounding you confirming and repeating what you already know.

For now though, I have a big mug of tea here and am having cuddles with my broken dog (see at least we understand each other haha!) and even writing this has made me feel a tad bit better. There are so many good things in my life that these hurdles will never beat me, I just have to remind myself sometimes that things happen for a reason and the mind has the power to overcome anything. As Chumbawamba said ‘I get knocked down, but I get up again, you’re never going to keep me down’.