How many of you tuned in to watch the Great British Bake Off on Wednesday then? I just love it, not just the actual baking but the fun they all have, the intensity you feel on the contestants behalf and let’s face it … Sue and Mel are just brilliant!

Now I adore Jaffa Cakes, why it has never occurred to me to try and bake them myself I don’t know but after watching the 12 budding bakers whip up those scrummy orange goodies I just had to give them a go myself. I pulled up Mary’s recipe and went off to get the ingredients I needed, here they are incase you want to have a go too:

These are actually much easier to make than you would imagine! First things first, turn your oven on to preheat at 160°C fan or 180°C if not, I always like my oven to be on a while so it can settle at a constant temperature before using it, I invested in an oven thermostat a while back and it turns out when it says it’s preheated it actually isn’t always!

Now onto your jelly, line a baking tray approx 8x12in with cling film, make up your jelly as per the instructions and add the orange zest, allow to cool in the bowl/jug for a short while before poring into the lined tray. Pop in the fridge to allow it to set.

Next grease a shallow bun tray, I ended up making two batches as I used a deep holed muffin tray the first time round and they were so hard to get out I trashed them.

Onto the sponge mix, put the egg and sugar into a bowl and whisk for 3-5 minutes, I used my stand mixer as it’s easier but if you are doing my hand don’t cut this stage short. You want your mix to become very pale and a thick whip, it will form soft peaks and that’s when you know you’ve got there! Now, very very carefully fold in your flour being sure not to knock too much air out of your mix.

When everything is combined split evenly between the 12 holes and pop in to oven for 7-9 minutes (mine took more like 11 but you’ll know) until they have risen and taken on a very slight golden colour, they should feel springy to touch. Let them sit in the tin for a minute of two before transferring to a cooling rack.

They don’t take long to cool, if your jelly is set then it’s time to melt the chocolate, break up the bars into small chunks, place in a bowl over simmering water and stir until melted (I melt mine in the microwave putting it on for 30 seconds at a time to ensure you don’t burn it). Leave in the bowl to cool slightly while you cut out your jelly discs with a 2in round cutter and place on the top of each sponge.

For the final part Mary says to use a spoon but I found it much easier with a piping bag, so I put my slightly cooled melted chocolate in a piping bag and snipped off a little hole at the end. Starting at the centre I swirled outwards ensuring all was covered and tried to keep those pesky edges tidy! I popped them in the fridge for a few minutes and then brought them back out to pipe some zigzags over they top, if you aren’t using a bag just drag a fork across them to create a pattern. 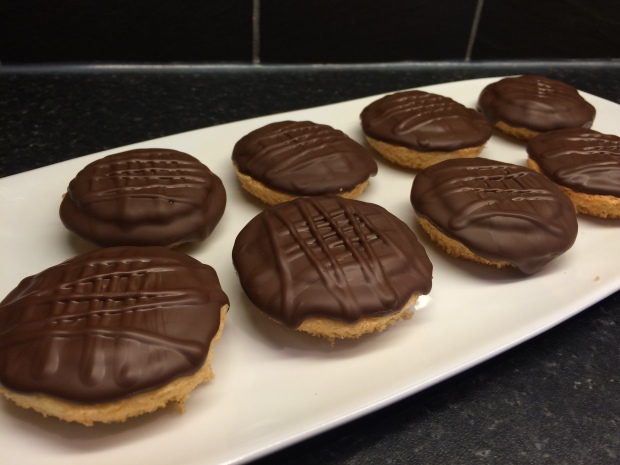 And here they are! I’m not sure I’m a big fan of this sponge base, I’m going to try again with a normal sponge base and see how they turn out but they are still yuuuummmyyyyy and perfect for my Dad to have a treat on his birthday today 😀

Why don’t you have a go? I promise they didn’t take long at all and are super super easy! I’m off on a long walk with Dad for his birthday, finally feeling a little better after being poorly this week, time to she these illnesses who’s boss! Enjoy the rest of your Bank Holiday weekend xx